16:00-21:00; Stergios: Maintenance finished around 15:00 UTC. Snowing and dense clouds prevented us from observing even with EMIR. 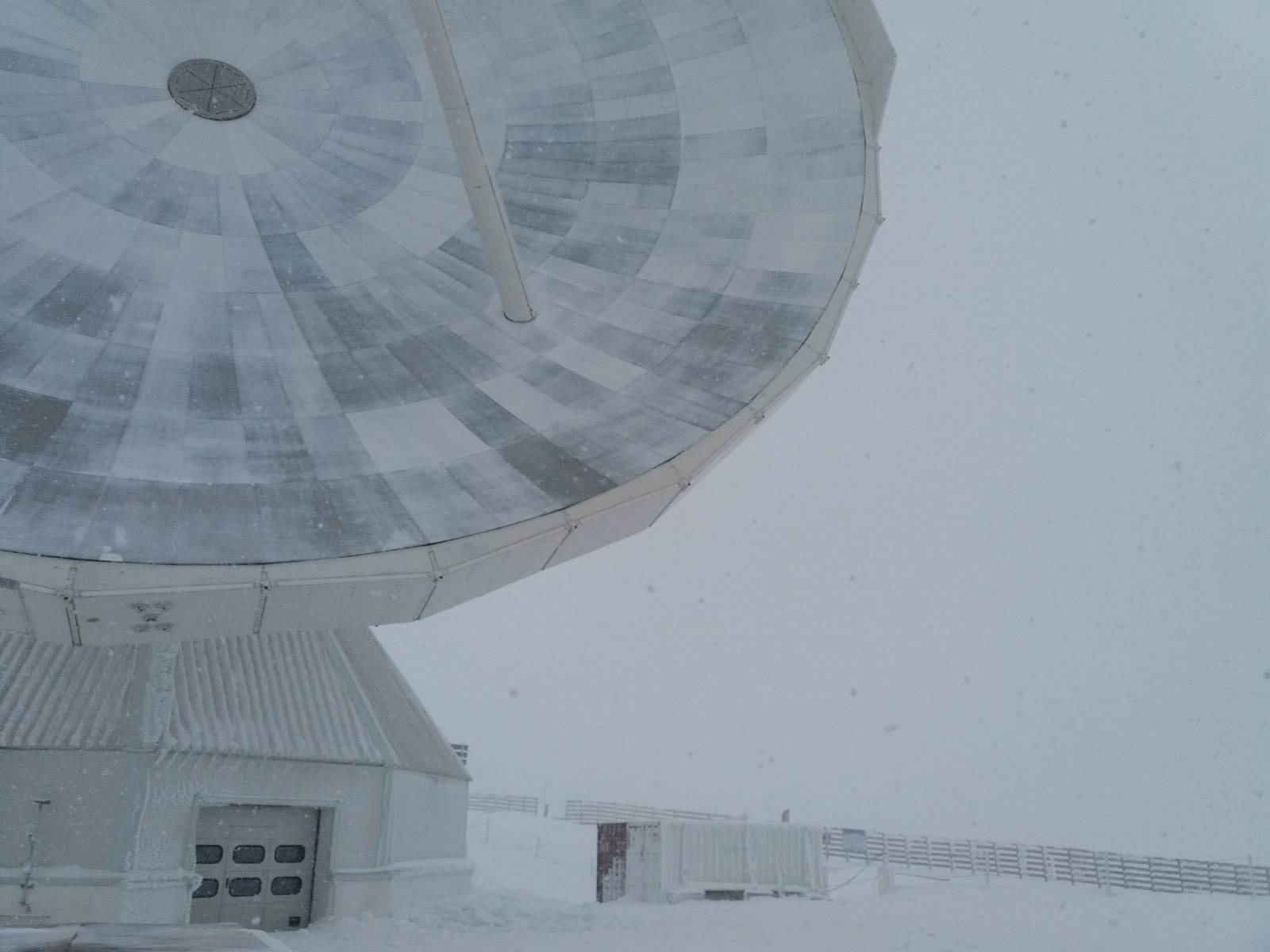 Weather clearing up (18:23 UTC), however ice is present on the legs and sub-reflector. Operator removed successfully the ice/snow from the antenna. DAQ started around 19:00 UTC with final measurements of 49/6/62 bad pixels for arrays 1/2/3, respectively. We continued with calibration observations on the pointing source 2251+158. A series of pointing/focus revealed some kind of astigmatism with two 'lobes' present at the final image, which might be caused from the recent stop of the de-icing. After many focus repetitions on this source the feature persisted. Eventually we moved to Uranus aiming for better calibration results. Carsten takes over. Good stability (peak-to-peak always below 3 Jy/beam) and tau around 0.2 at most times.

09:00-15:00; Antoine: 1st hour spent trying to get a good focus as the rising sun was heating the antenna: weird feature/artifact when trying to focus on K3-50A (see screenshot), then switched to NGC7027 for better focus. After that good observations of program 199-16: finished observing PSZ2-G046.1. Then switched to project 171-22 to try to wrap up the last 3 repetitions of PSZG126. Two repetitions done, but at least 1 scan was lost because the auto-tuning of the KIDS got turned off (remote connection at around 11h55 UTC ?). Then unfortunately there was a gap in visibility with no observable projects, so time was spent pointing, focusing and calibrating on different sources until 15h. Overall quite good weather conditions: no wind, very few clouds (if any), tau ~ 0.20. And many thanks to Stergios for helping me through my first shift of NIKA2 observations.

15:00-21:00; Gustavo: After pointing and calibration we moved to observe galaxy cluster PSZ2G115 of project 199-16. We did the requested 4 repetitions on this cluster with 4 scans each. We repeated the pointing after 3rd repetition. Then, we moved to project 122-16 to observe source B213E_N . After pointing, focus and calibration we started the scans until the object reached 67 deg altitude. We did two repetitions with two scans each. Finally, we moved to project 126-22. We did the last repetition on orion_b1. The KIDS autotune was a bit off, so we retuned the KIDS and proceeded to observe repetition 2 and 3 of orion_b2.

11:00-17:51; 087-21: POLAMI project observed from 11 UTC (one hour lost due to technical issues) until 16:15 UTC (15 min of additional time was offered due to delays with the previous NIKA2 project). An EMIR test was required from the operator to check for possible spikes. Change back to NIKA2 was initiated at 16:51 UTC.

17:51-21:00; Gustavo: We initialized the NIKA2 camera at 18:00 CET after changing from EMIR observations. The data acquisition process had some problems at the beginning. PID 1 of the MACRT monitor was set of off, instead of on as it is suppose to be. After several tuning processes, the number of bad pixels was 81, 6, 104. We then started the pointing and focus processes using Uranus. The pointing was failing dramatically. No sign from Uranus in the scans. After several trials on Uranus and other sources, we decided to reset NIKA2 and re-tune the KIDS again. The number of bad pixels after tuning was 43, 6, 58. We moved back to Uranus for pointing. This time it looked ok. The problems seemed to be solved after re-setting NIKA2. We did pointing, focus and Calibration on Uranus. We finished all these procedures at 19:40 CET. We then moved to project 126-22 to make the last repetition of orionb_4 target. During the scan, the weather conditions changed dramatically (20:00 CET). The maximum wind speed was above the limit and the operator cancelled the scan and put the antenna in safe position. The shift finished. No further observations made.

09:00-15:00; Antoine: Finished a repetition of L1688 then did another one. After that switched to project 199-16 and observed PSZ2-G084 for 2.2 hours straight, only 1 pointing was necessary. Conditions were very good, tau~0.12 and peak to peak variation on the maps below 4 Jy/beam, no focused needed. Observations of PSZ2-G084 are finished. After that gap in the observable sources, so pointing + focus + calib1_scan and then observation of project 089-22 from the summer pool to fill the gap.

15:00-21:00; Gustavo: We started the shift by setting the pointing, focus and calibration on Uranus. Then we moved to project 105-22 to observe source B213-CE for 3 repetitions with two scans each. Then we did re-pointing on Uranus and went back to source B213-CE for another 3 repetitions to finish with this project. After that we did another round of pointing and focus before changing to another project. Unfortunately, the weather conditions changed and eventually we had to stop observing due to wind alarm at 19:15 CET.

15:00-21:00; Gustavo: We aimed at observing the last target of project 199-16, the galaxy cluster PSZ2G155, but the beam was very elongated to comply with the specifications of the project, so after several focus an pointing, we moved to project 089-22 to observe 0413-118 target for 6 scans. After we finished this target we then proceeded to focus and pointing again on Uranus and since the beam was more stable now, we moved to observe PSZ2G155 cluster for 4 repetitions of 4 scans each. The project 119-16 was 100% completed. The remaining time of the shift was dedicated to observe target orionb of project 126-22.

The team thinks that it is the superposition of some (nice) foreground filamentary stuff with the quasar behind. The point-source on the East is known in Simbad as a dense core. Anyway, we think this quasar is thick (18" at 1mm even after focus) because of the surrounding foreground. Maybe that source should be banished for focus. But it could be used with NOEMA to do absorption spectroscopy with a bright beacon.

15:00-21:00; Gustavo: We start the shift by continuing the scan of target J2213+0116 from project 089-22. We repeated the scans for a total of 20 more scans to finsih the 6 repetitions on this source. After all these scans, the project 089-22 was finished and we moved within the project nikaw-22 for pointing, focus calibration and skydip. We used Uranus first for pointing focus and calibration. Then, since the next observing target was still not visible, we moved to Neptune for calibration and then to other sources for more calibration. By 16:30 UTC, the weather changed dramatically with clouds covering the whole sky. We kept the telescope pointing towards Neptune for intervals of 10 minutes each to test the movement of the source as function of the p2p fluctuating sky emission. After 1 hour of pointings, we stopped observations and wait until the weather became better by 18:44 UTC. Then we moved to the project 126-22 and started scans of Orionb after pointing and focus on ALFORI, until the end of the shift..

Anomalous refraction: we took advantage of the temporary bad weather yesterday afternoon to take pointing scans on Neptune (thanks to Gustavo).

illustrate (especially in elevation here, bottom red plot) that within 10 seconds the source has moved apparently downward by 3 arcseconds.

We think that this apparent motion is linked to the background gradient as apparent in that figure: 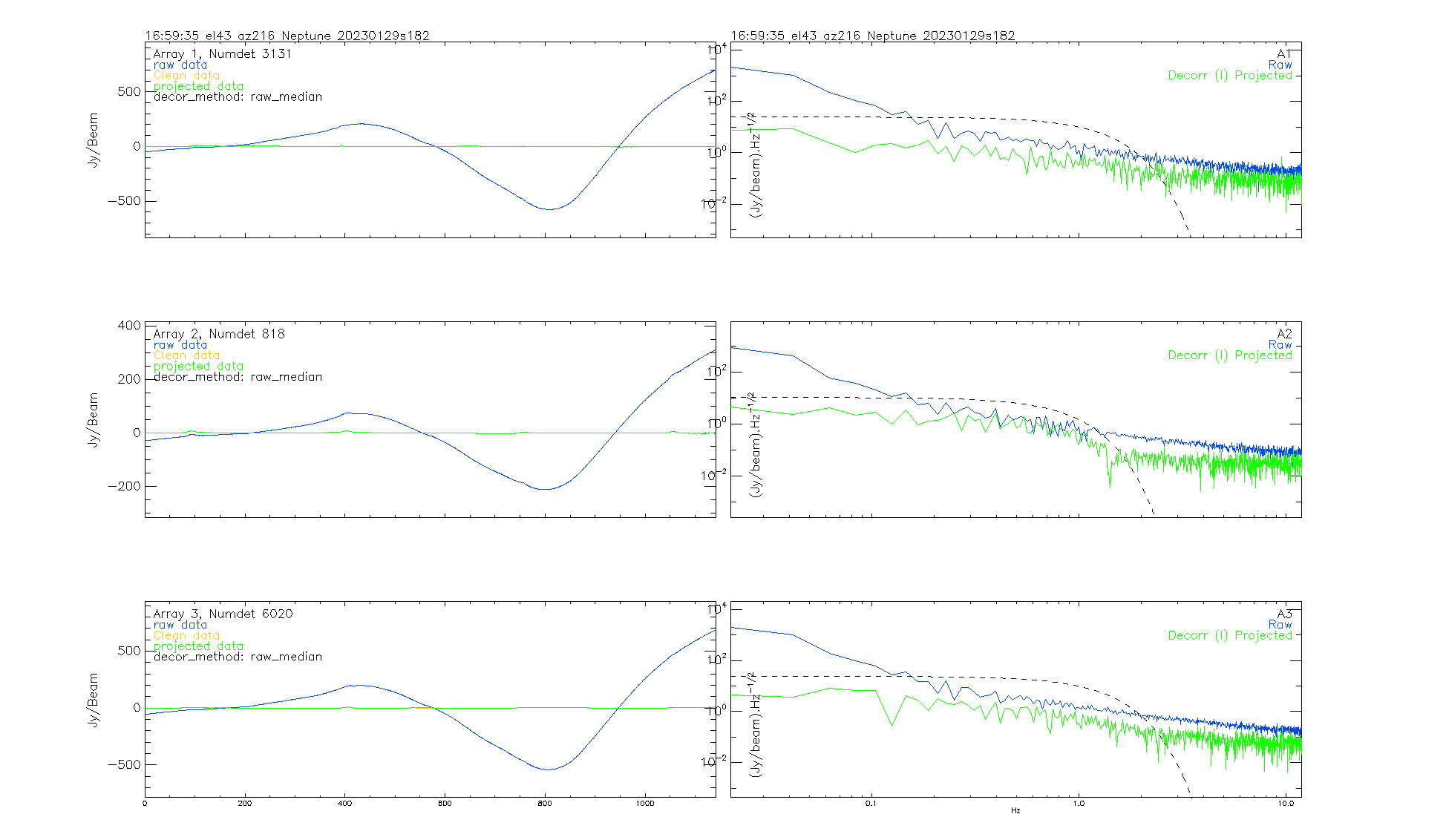 where you see a change of sign for the gradient between the up and down of the pointing subscans (not linked to the natural gradient from the change of airmass which is much smaller here).

If that model is correct (unpublished), a typical p2p of +-200Jy/b at 2mm would correspond to 3 arcseconds displacement. However the orientation of the wind plays a role here so it is an underestimate. In the conditions usually chosen by observers (p2p less than +-5Jy/b), the apparent motion of sources is thus safely well within an arcsecond. All the plots can be found at this URL: https://www.iram.es/mrt-lx1/mrt/ncs/monitor/Nika2Logbook/logbook_20230129.html In addition, the pointing corrections duly noted by Gustavo are fluctuating by 2 to 3 arcseconds in both directions from scan to scan (s178-s186). Further readings: https://articles.adsabs.harvard.edu/pdf/1987A%26A...184..381A (Altenhoff 100m and 30m 1987) and https://ui.adsabs.harvard.edu/abs/2002MNRAS.336....1A/abstract (Scuba2 and the hint of the correlation between sky noise and mm seeing).

15:00-21:00; Gustavo: We continue the observations with EMIR of project 102-22. After several pointings we observed SUN-15_69 in RA and we finished the observations with EMIR at 16:10 CET. The change of instruments to NIKA2 was painful since the KIDS did not responded as they should and we had to reset several times the data acquisition system of NIKA camera. After several attempts that took more than an hours, finally at 18:24 local time we managed to get NIKA2 back again in production with a number of bad pixels of 44,,6,72 respectively. We then started the pointing, focus and calibration procedures on Uranus. Finally we moved to project 126-22 to continue the observations of Orion B region. We took two repetitions of Orion-b 3 and 4, then re-pointing, and finally Orion b 5 and 6 were taken until the end of the shift at 9pm local time.

From what I saw this week: The peak-to-peak variability of the raw timelines of the scans on the science targets has little or nothing to do with the rms of the final timelines, i.e. the 3rd rms shown by QL. The peak-to-peak may be +-1Jy/b or +-15Jy/b, and still the final rms is not affected. Possibly, we should better monitor the residual rms of the electronics and boards after common mode subtraction of the sky.

03:00-09:00; FXD: Clear sky. Wind 6m/s. -8degC. Exceptional Tau=0.09. Goto project 169-22 and hammer at GJ526North. There is an unsolved issue of focussing since 1h30UT. Focus has moved from -1 to 0mm. Even at 0mm the 1mm and 2 mm beams are not correct (18.5 and 14"@0.2mmFz). I have tried several focus sequences with Carsten to no avail. The best we obtain is 20x18 and 15x20" at 2 and 1mm, when moving to the array-averaged focus of 0.04mm. The secondary mirror looks ok in temperature. Could be the telescope itself that induces the large beam shape. Focus sequence at 04:30UT. ' Optimal ' is 19" and 17" at 2 and 1mm. On the following pointing, it's getting worse 20" at both frequencies. The old lady needs spectacles. It is as if we were in the middle of a bad afternoon. What a pity with such a good dry weather! Both operators (Sergios and Juan-Luis) had a look at what could cause such a problem, without success. Last successful pointing was 20230130s225. [It turned out that the electronic rack controlling the antenna temperature had switched itself off around midnight. <CK>. Isn't there an alarm for such a circumstance ? <JFL>]