16:36-21:00; Stergios: No NIKA2 neither EMIR observations were conducted during due to high tau values (see following plot depicting the corresponding tau values for this time window). We performed a quick system check that started at 16:36 (after maintenance) checking only the tuning since we could not perform a pointing or focus due to the weather conditions. For training purposes of the current observers we initiated the data acquisition for NIKA2. 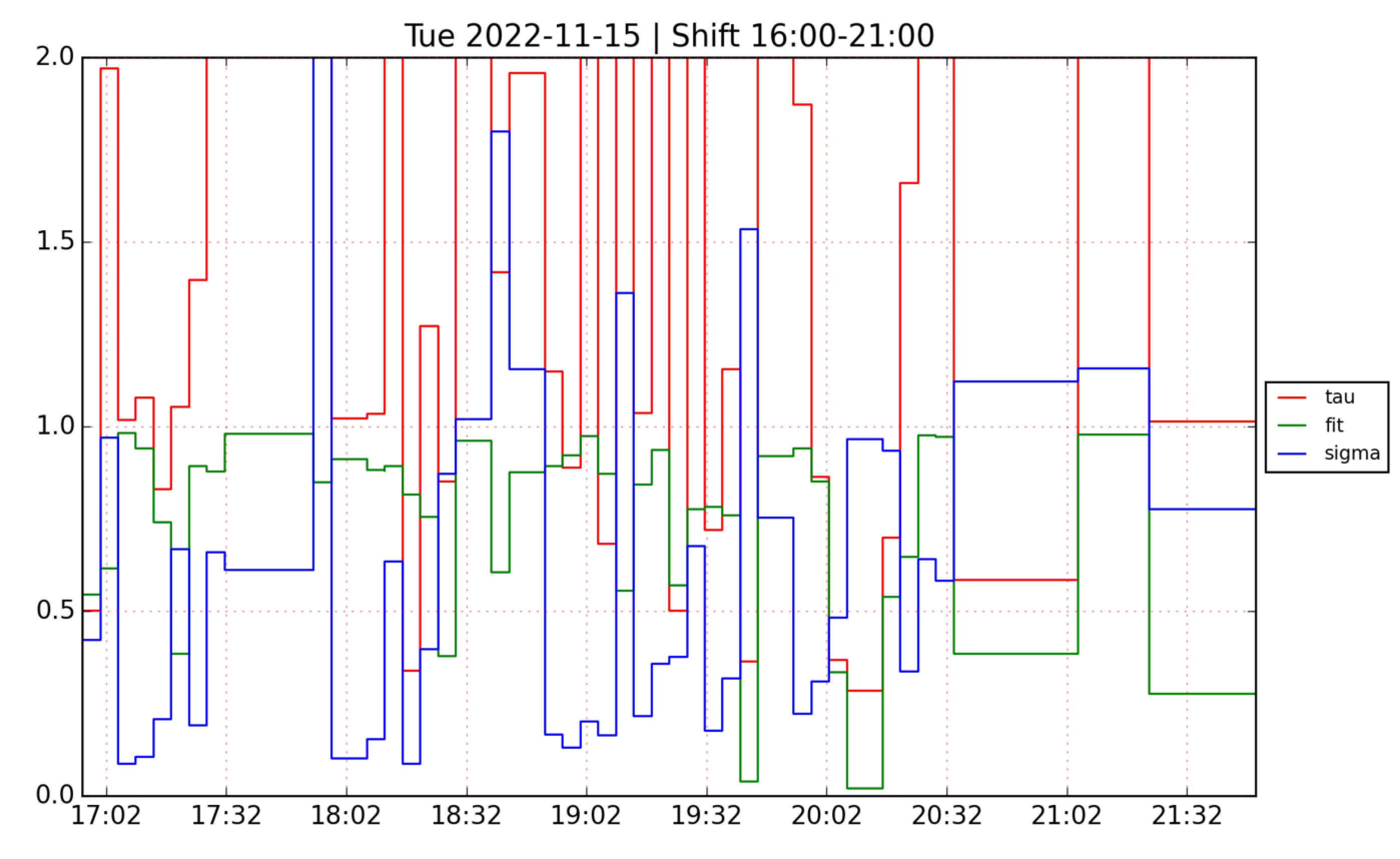 03:00-09:00; Stergios: High tau values and rain during the whole shift with increase of the wind velocity. No observations. 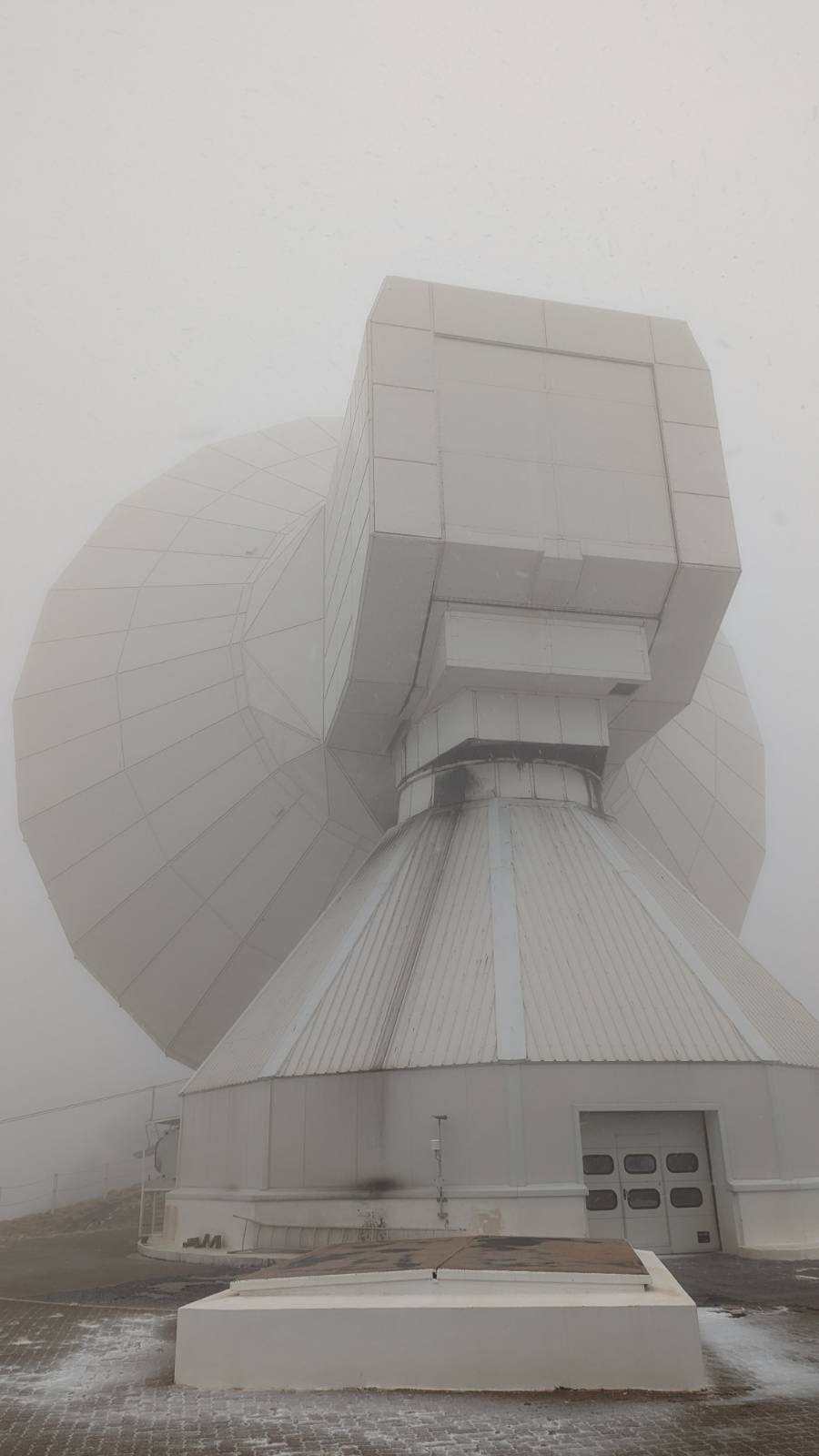 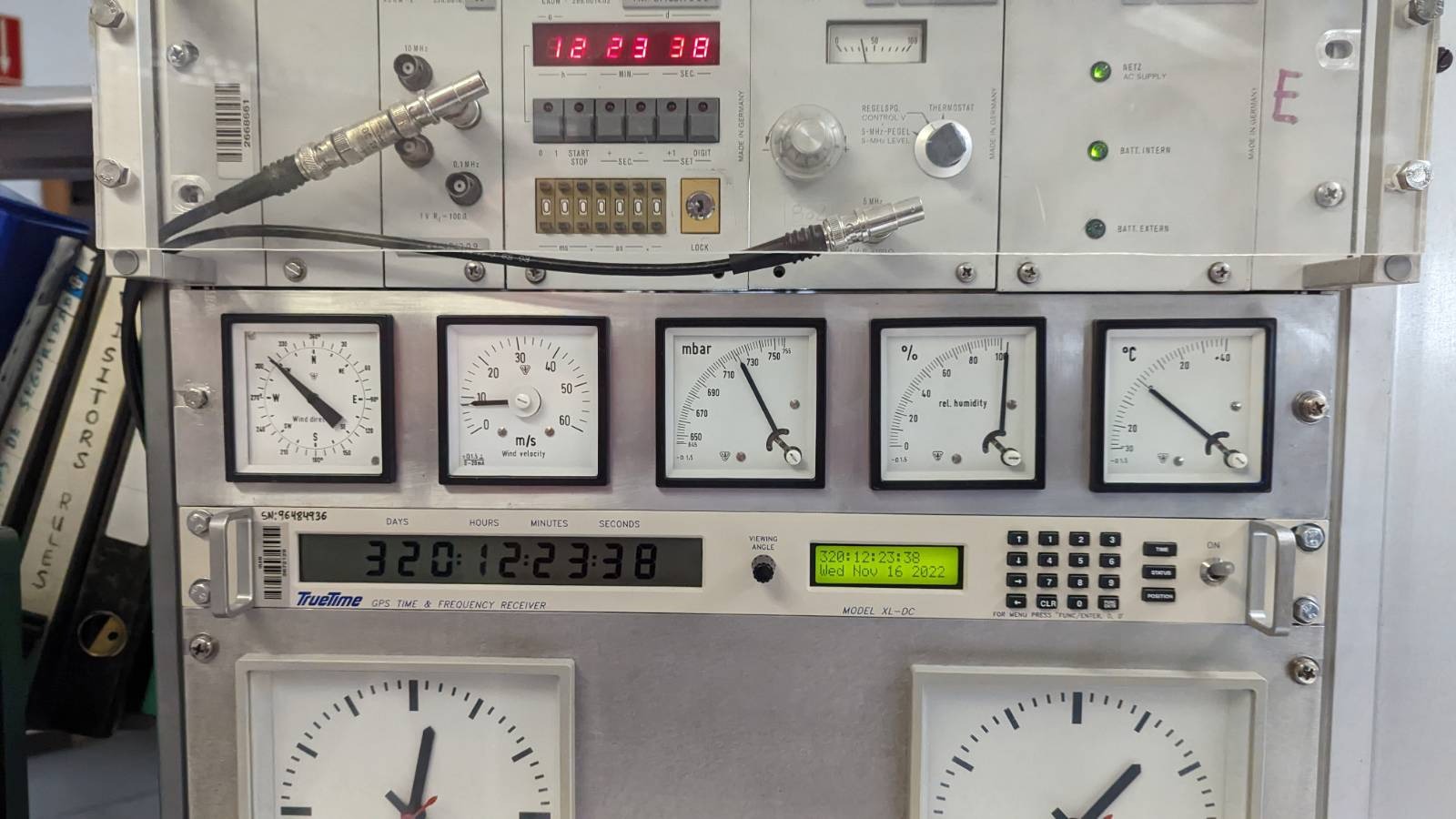 15:00-21:00; Israel: No observations carried at the telescope due to high values of tau (~5-8) and periodic rains. I attach a picture of the site during the late afternoon 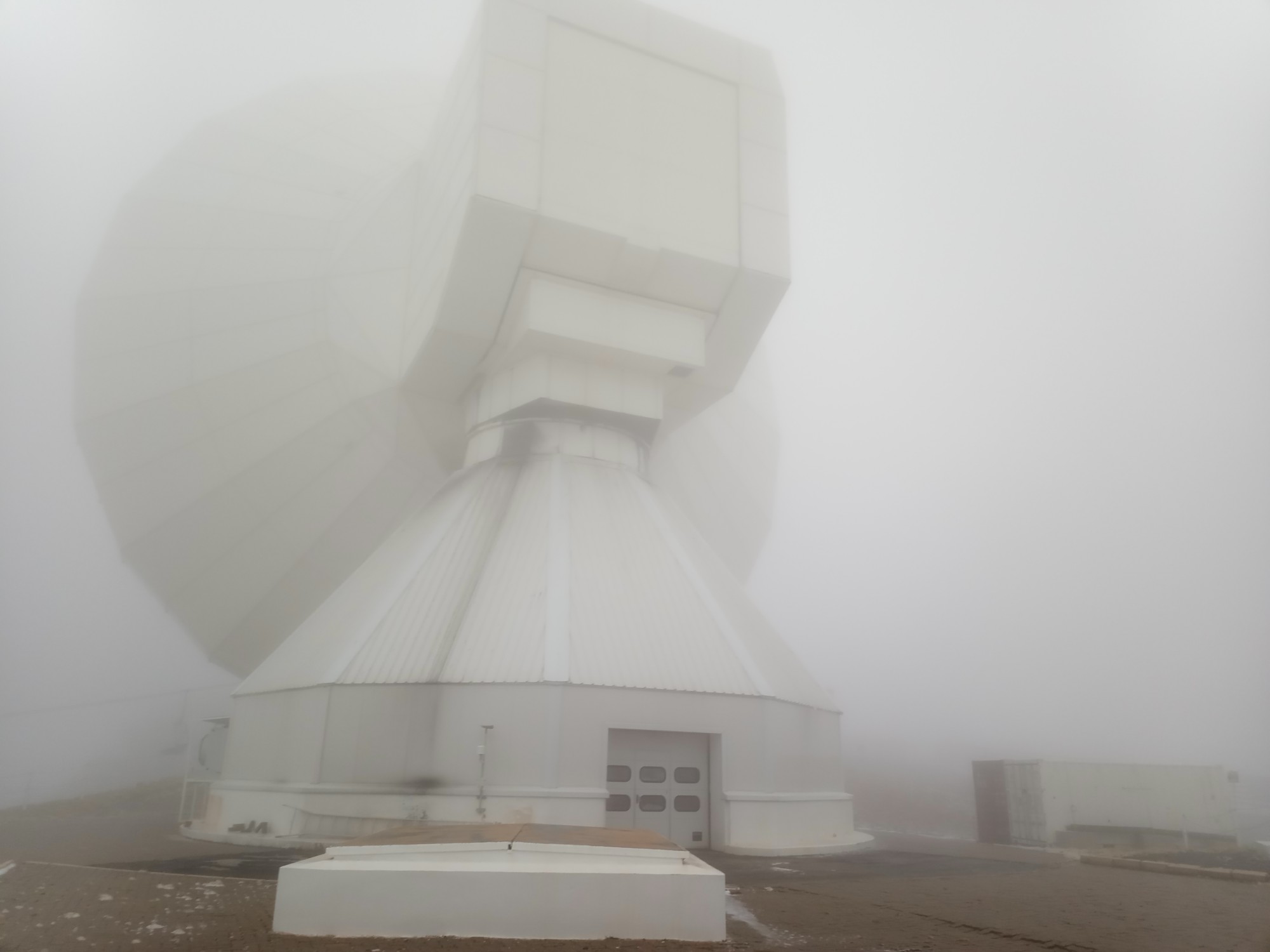 03:00-09:00; Stergios: Started observations with EMIR at 5:32 under the project 079-22. We tried a couple of pointings which showed high variability in the atmosphere. We stopped around 6:00 due to rain. We started again the observations with EMIR at 7:46, trying pointing under the same project and stopped again at 8:09 due to high values of tau and the fact that we could not obtain a stable pointing. We repeated another data acquisition with NIKA for training purposes. No observations on science targets. 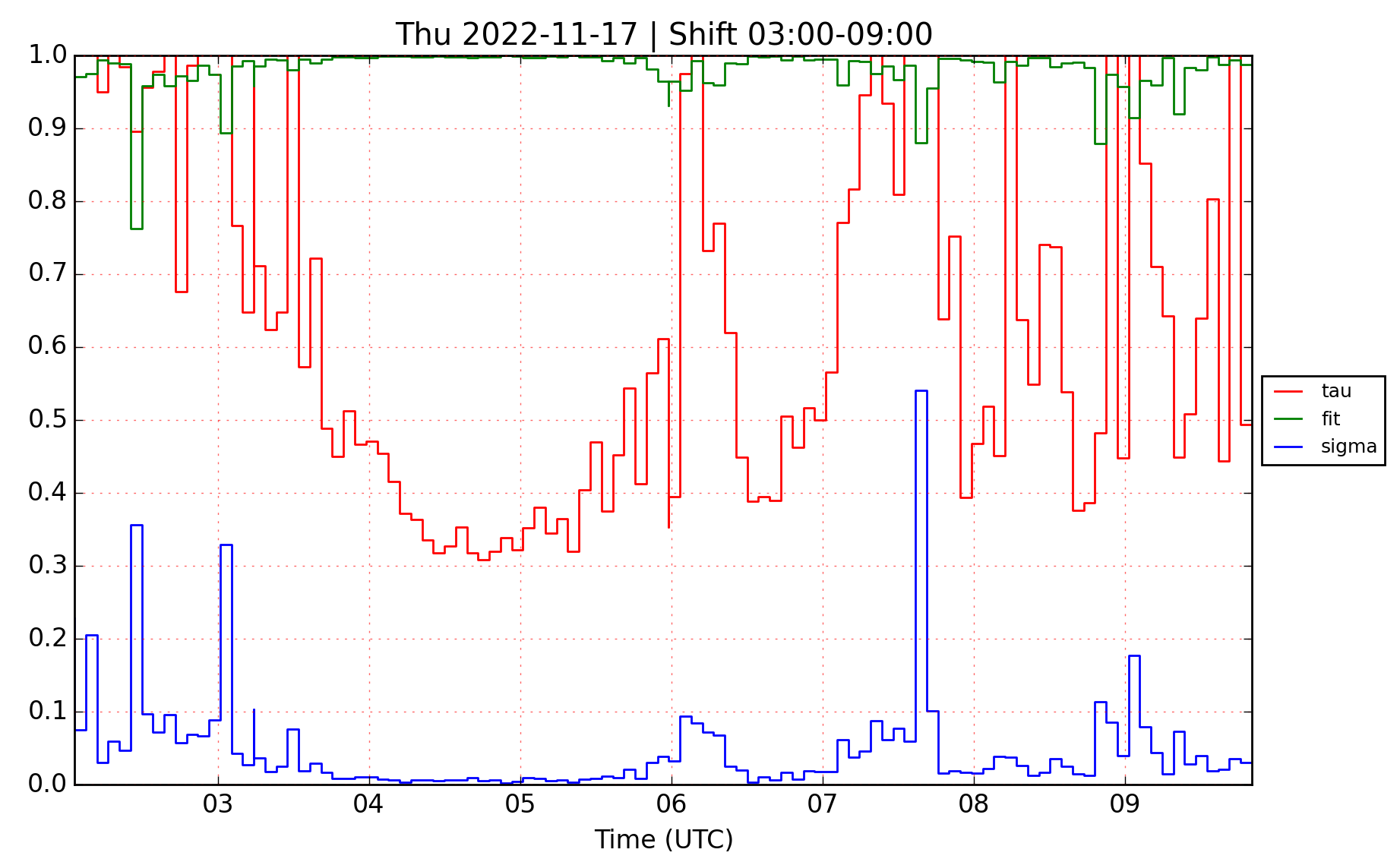 15:00-21:00; Israel: No observations performed due to the foggy weather -high and unstable values of tau (~1-3)-. The whole shift was accompanied by periodic rains.

21:00-03:00; Lara: Due to highly unstable weather conditions and large tau values, it was not possible to observe.

03:00-09:00; Stergios: We continue with the observations of PSZ2G186 (project 093-22) with excellent weather conditions (tau~0.2, quite stable) until 04:04. We decided to move to COSMOS (project 192-16) performing a pointing/focus on 0851+202 again. The histograms from the data acquisition seem to deviate a bit far from the zero values with the histograms being a bit broad, although this drift should be attributed due to the long COSMOS scan (~52min): 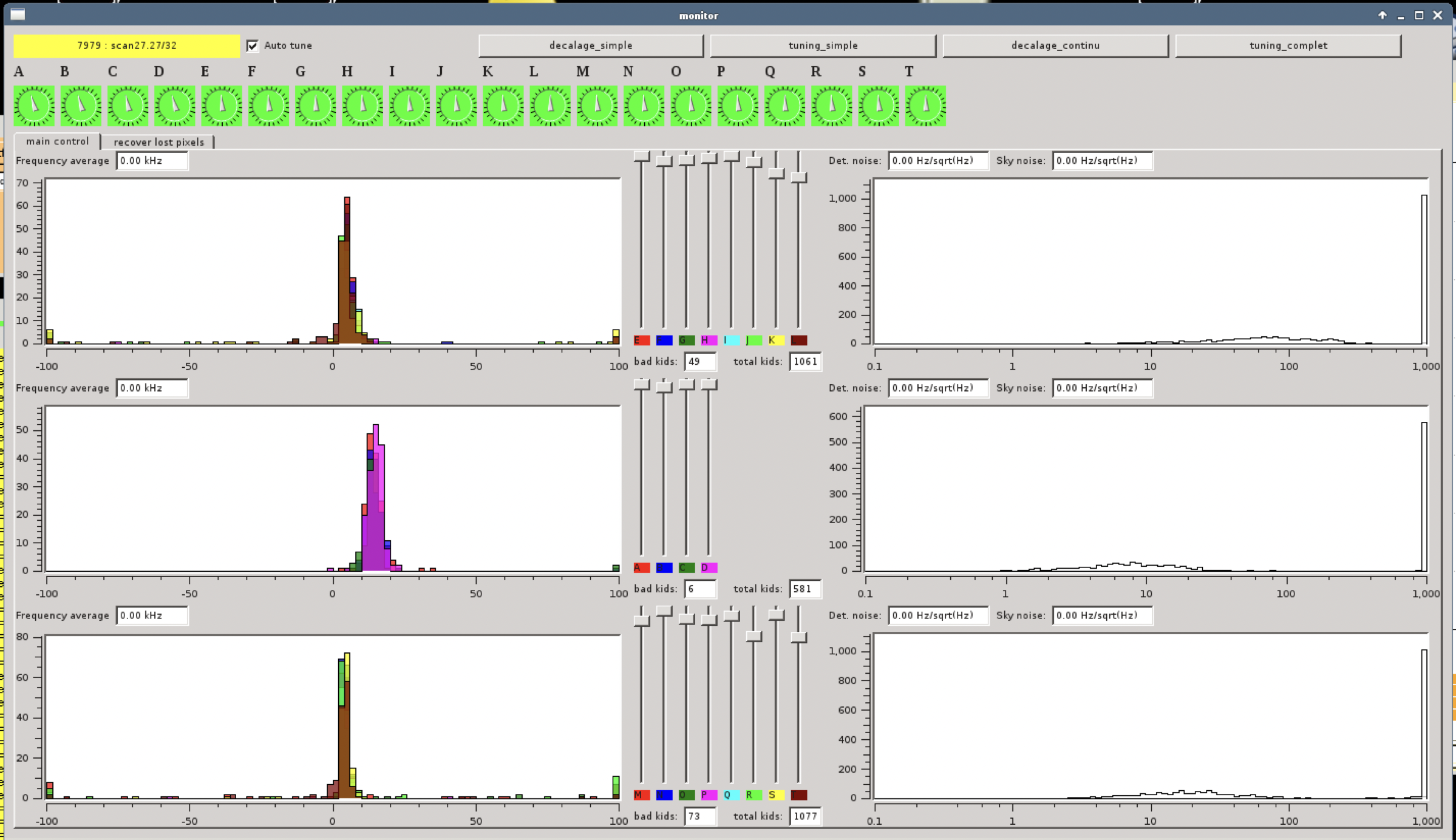 We performed another skydip and at 06:36 [20221119s43] we switched to project 160-16, performing firstly a pointing/focus and then going to target NGC4254. High variability of ~10Jy/b at 2mm, we repeat the data acquisition and repeat the scans to test the variability (the Sun is rising which might have caused the effect). Tau is increasing so we move to the more relaxed project 089-22. We took good pointing/focus and we tried one scan on the source J0842-0157 however the tau is increasing, therefore we wait and possibly change to EMIR.

09:00-15:00; Rodrigo: We waited until tau values become stable and switched to preparations for project 095-22. NIKA2 data acquisition is performed before starting. 66, 8, 93 bad pixels in each array, but histograms do not stay close to zero. Sky covered and tau values keep unstable (2 < tau < 4) and increasing. Switched to EMIR (~10:00 LT). Started with pointing and calibrations. Atmospheric conditions get stable around tau=0.3 and switch back to NIKA2 (~12:00 LT). Data acquisition performed and 59, 7, 87 bad pixels found in each array. Observations for project 079-22. Pointing/focus and observations from target AR2747 (two cycles of eleven observations with pointing in between).

15:00-21:00; Israel: Observation shift started at 14h (UTC). Weather conditions were clear with low wind and tau~0.3 and suitable for NIKA-2 observations. KIDS were calibrated at 15h (UTC) with 57, 7, 88 bad KIDS.Sky conditions at 5 Jy/b but visible targets for project 199-16 were missing from Xephem so project 089-22 was targeted. Issue with 199-16 solved, with the help of Angel Bongiovanni, at ~16h (UTC) but sky variability now at about 5-7 Jy/beam. Observations with NIKA-2 were continued for projects targeting point sources, namely: 089-22, and 032-22. Values for tau steadily increased along the shift from 0.3 to 0.5 at sunset. At 18h15 (UTC) we stopped NIKA observations and waited for about 40 minutes to see whether tau will settle around 0.4 or lower to continue observations with NIKA2. At 19h00 (UTC) we switched to EMIR due to the increased worsening of weather conditions (tau>0.5). Observations stopped at 19h30 (UTC) as weather conditions prevented to get good pointings and focus even with EMIR. During the shift we carried-on 2 calibration with NIKA (calib_1scan in Neptune and NGC) but no skydips nor beammaps.

Stability improved so we move to COSMOS after pointing/focus however we had to stopped at 08:00 UTC due to high wind. The anemometer was showing low wind velocity, however the antenna wind alarm and 'feeling' of the wind outside the main building were indicating wind close to the limit. GL checked the anemometer which might need some adjustments. Here is a video:

High instabilities continued in all scans, thus we moved to project 032-22. Due to the low rms of the maps created (~40mJy/beam) and the relative lower peak-to-peak values of the latest scans (~8-10Jy/b) we decided to move to the project 199-16 and try some scans to one of the clusters. The peak-to-peak instabilities are quite high (~10Jy/b) but we run a few scans in order the PIs to check whether the data are usable and we can observe the next/final summer pool week under these weather conditions. The peak-to-peak instabilities decreased to ~5-6Jy/b so we continued with the same project. The weather improved even more, thus we moved to 2251+158 for a beam map [scan 20221120s192] as it was the best case close to our current project. Continuing with project 199-16 under excellent weather conditions (tau~0.15 and stability).

09:00-15:00; Rodrigo: Shift starts with high and unstable tau values (>0.6). Fog is also present. Tau reached ~1.9 and the telescope was parked (~10:15 LT). At ~12:15 LT conditions improve (fog dissipates and tau~0.4, pwv~6mm). Move to backup project 083-22. Performed a first pointing and focus with source 1226+023. Procedure repeated since atmospheric conditions are not ideal. New pointing procedure with source 1502+106. This time, using parameters /notf 8 and /totf 20. Beam is too wide (~30 arcsec in azimuth). After several tries, not able to fit beam. Weather conditions deteriorate (dense fog). Telescope is moved to low elevation and observations are paused (tau>0.6, ~13:00 LT). Telescope parked after that because of dense fog and rain.

21:00-03:00; Lara: very bad weather conditions (high wind and rain) at the beginning of the shift, no observations were done. At 00:10 am LT weather conditions improved (tau ~ 0.26, but still very windy, the forecast had predicted a worsening within 30 min - 1 hour). At 00:17 LT I started observing with EMIR (tau~0.37, pwv ~ 4) the project 009-22, receiver setup receMap4-1. I repeated a few times the pointing and focus on Mars (showing a bit disturbed gaussian profile; tau was jumping between 0.3 and 0.7). At 00:49 LT I set to project test and I kept monitoring the atmosphere, waiting for more stability. After 20 minutes, the weather conditions had improved and I start the observation at 01:15 am LT (tau~0.3, pwv>4, still windy). The observation ended at 02:35 am. In the meantime, tau was slightly increasing. While doing the pointing to Mars the elevation break got on without any evident reason (02:53 am LT). The problem was solved by the operator moving by hand the antenna. After pointing to Mars (tau ~0.5), I started again the observation on the 009-22 source. Two complete maps (RA+Dec) finished and a second series was launched.